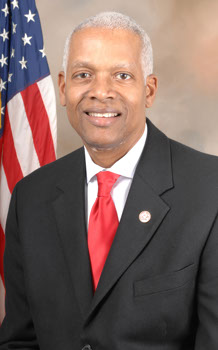 Now in his fifth term in the U.S. House of Representatives from Georgia’s Fourth Congressional District – which encompasses parts of DeKalb, Gwinnett and Newton counties and all of Rockdale County – Congressman Hank Johnson has distinguished himself as a substantive, effective lawmaker and a leading national progressive voice.

Named one of the most effective Democrats in Congress by a University of Virginia and University of Vanderbilt study, Rep. Johnson has proven his ability to get things done.

From his seat on the House Judiciary Committee and as ranking member of the subcommittee on Regulatory Reform, Commercial and Antitrust Law, Rep. Johnson has introduced, co-sponsored and passed legislation to level the playing field for everyday Americans. His bills that protect consumers and citizens’ civil liberties include the Arbitration Fairness Act (AFA) and the Stop Militarizing Law Enforcement Act.

As a champion for digital inclusion and an open Internet, Rep. Johnson has pushed to empower low-income and minority communities through digital rights, broadband access, and equality of opportunity online.

A member of the House Armed Services Committee, Rep. Johnson became a leading national voice for the demilitarization of local law enforcement agencies in 2014 after police donned camouflage tactical gear and climbed aboard heavily armored vehicles to confront peaceful protestors in the streets of Ferguson, Missouri, in the aftermath of the shooting death of an unarmed teenager. To help restore trust between law enforcement and the communities they serve, he filed the Police Accountability Act and the Grand Jury Reform Act in the wake of police shooting deaths of unarmed black men across the country.

In 2010, Rep. Johnson was a member of the prosecution team in the impeachment trial of New Orleans U.S. District Judge G. Thomas Porteous Jr., resulting in the first impeachment and conviction of a federal judge in more than two decades.

Prior to taking his seat in Congress in 2006, Rep. Johnson practiced criminal defense law in Georgia for twenty-seven (27) years. He served twelve (12) years as a magistrate judge, and five (5) years as a county commissioner.