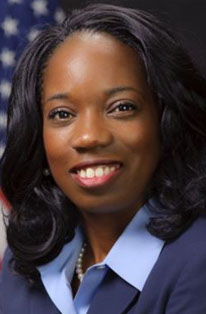 Ms. Fleming was appointed by President Barack Obama as the Region 4 Regional Administrator in September 2010.  She is the first African American to hold this position in Region 4; however, this is not the first time she has made history.

Ms. Fleming has broken many barriers a number of times throughout her distinguished career. Prior to coming to EPA Region 4, she took office as the DeKalb County District Attorney in January 2005 making her the first African-American and first woman ever to serve in this post. She also served as the first woman, first African-American and youngest to ever be elected as DeKalb’s Solicitor General.

Under both of her Administrations in DeKalb County, Ms. Fleming implemented a number of innovative programs by collaborating with non-traditional partners to keep the communities she served informed, protected and engaged. For example, in October 1999, she initiated a faith-based coalition to end domestic violence in DeKalb. The project educated faith community members about domestic violence and available counseling resources, but also provided training and assistance to religious leaders who wanted to establish their own counseling services or shelter facilities. She also implemented programs which recognized the importance of protecting and supporting our younger generations; programs focused on addressing rising concerns of truancy among teens and Just Us G.A.L.S., Girls Achieving Leadership and Success, an annual teen mentoring workshop.

In her new role, Ms. Fleming is responsible for the eight southeastern states, Alabama, Florida, Georgia, Kentucky, North Carolina, Mississippi, South Carolina and Tennessee, as well as six federally recognized tribes; making Region 4 the largest of ten regions. In addition, she leads efforts to maintain and enhance the quality of work life for Region 4’s approximately 1,000 employees while effectively managing a budget of over $500 million.

Since accepting her new position, she has focused on advancing the Administration’s priorities of protecting public health and the environment, including:  taking action on climate change, improving air quality, assuring safety of chemicals, protecting America’s waters, expanding the conversation on environmentalism and working for environmental justice and building strong state and tribal partnerships.

Using these priorities as a guide, Ms. Fleming has addressed many

critical and complex regional challenges, internally and externally. The Region has advanced several important issues and continues to lead national implementation of Agency policy and guidance.  She has incorporated the One EPA philosophy into daily operations in order to better serve the communities protected by EPA. Under her leadership, Region 4 has incorporated several innovative programs and initiatives focused on expanding the environmental conversation to members of the federal family and non-traditional partners such as the faith-based community.

Ms. Fleming is a New Jersey native and earned a bachelor’s degree in finance from Douglass College, the all-women’s college affiliated with Rutgers University. She earned her law degree from the Emory University School of Law.

Having always been a leader in any setting, Ms. Fleming has held and continues to hold several notable positions. She is a former president of Emory Law School’s Alumni Association, has served as an Emory University School of Law adjunct professor and received the institution’s Distinguished Alumni Award in 2007 among other legal honors. She is a member of the National Council of Negro Women, the NAACP, a graduate of the Leadership DeKalb Class of 1999, the Leadership Georgia Class of 2000 and the Leadership Atlanta Class of 2007. Most recently, she has accepted the prestigious position of chairing the Combined Federal Campaign, the largest charitable organization in existence.

In March 2001, Gwen was inducted into the Douglass College Alumna Hall of Fame for her contributions to the law and the community. She is the youngest alumna to be so honored in the college’s history.

Gwen credits her parents, Ursula Keyes, a retired registered nurse and her late father, Andrew J. Keyes, a former Tuskegee Airman, as the reason for her commitment to community service. She says that her parents “taught her to have compassion and serve people who cannot help themselves.” She is married to Randal Fleming and they have two sons.  The Flemings are members of Green Forest Community Baptist Church in Decatur, Georgia.