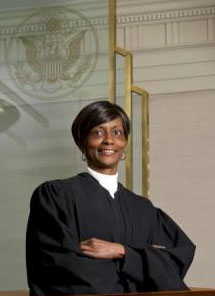 Sonja F. Bivins serves as a United States Magistrate Judge for the Southern District of Alabama. After earning her B.S. degree in Political Science from Spring Hill College in 1985, Bivins attended the University of Alabama’s School of Law, where she was awarded her Juris Doctor in 1988. She was elected to the Spring Hill College Board of Trustees in 2007.

Bivins previously served as a judicial law clerk for the late Honorable United States District Judge Virgil Pittman in the Southern District of Alabama. Upon the completion of her clerkship, she relocated to Atlanta and began the practice of law. Bivins’ primary practice focus was the representation of employers in a broad spectrum of employment-related matters. While in private practice, Bivins participated in Leadership DeKalb and served as President of the DeKalb Lawyers Association and as a board member for the DeKalb Rape Crisis Center.

In 2004, Bivins returned to Mobile upon her appointment as a United States Magistrate Judge for the Southern District of Alabama. Her professional interests include the Just the Beginning Foundation, a multiracial, nonprofit organization comprised of lawyers, judges, and other citizens. The foundation is dedicated to developing and nurturing interest in the law among young persons from various socioeconomic, ethnic and cultural backgrounds.

Bivins also serves as a mentor to Spring Hill students interested in law careers and is involved in other activities designed to also help equip young people to make good decisions, to excel academically and to become servant leaders in their communities. Bivins has taught youth Sunday school and vacation Bible school classes, helped to organize and chaperone college tours, coached and judged student moot court and mock trial competitions, hosted student interns in chambers, participated in countless career fairs at local schools, and served as a respite parent for a family and children services agency.