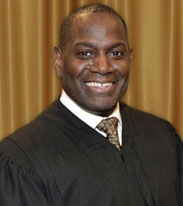 Judge Vincent C. Crawford, a Savannah native, graduated with honors from FloridaA&MUniversity in 1987 with a Bachelor of Science degree in Political Science. He received his law degree from MercerUniversity in 1990 and graduated from law school with honors in the area of trail advocacy. Judge Crawford began his legal career with Georgia Legal Services in the fall of 1990 and with a primary practice of representing battered women in divorce proceedings. In 1993, he began his career as a prosecutor with the Richmond County District Attorney’s Office and as a Deputy Chief of the violent crimes division. He joined the DeKalb County District Attorney’s office in April of 1995 and served on the DeKalb County District Attorney’s office trial team for 2 years.

In 2011, he was appointed Chairman by the Supreme Court of Georgia for the Juvenile Court Improvement Initiative.